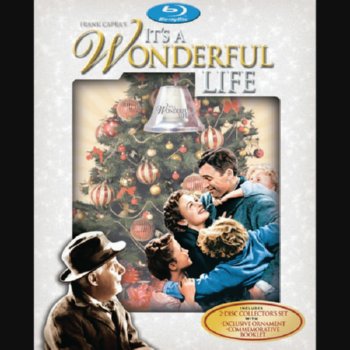 What’s left to say about this Christmas classic that hasn’t already been said? It has been as much a holiday tradition as trimming the tree in some households with these families not feeling like it is actually Christmas until they’ve seen the film. It is watched over and over by many.  A Christmas tradition in many a home.

The film has that old fashioned feel about it that you do not get in films today. There is an innocence and an importance given to family which has disappeared from filmmaking. The entire cast, especially Mr. Stewart, turn in strong performances and the direction is marvelous. As a bonus you get the original black-and-white version along with the colourized one. This holiday classic should be a part of everyone’s blu-ray collection.

George Bailey (Jimmy Stewart) is going through a tough time and is thinking of taking his own life. The angels hear this and jump into action. His guardian angel, Clarence (Henry Travers – The Invisible Man, The Bells of St. Mary’s), stops George from jumping off a bridge by setting up a situation in which George has to rescue him. Clarence then shows George how life would be if he did not exist. This gives George a whole new perspective on life.