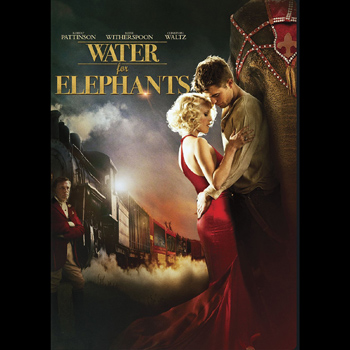 It is not until you see a film where there has been some miscasting that you begin to realize how important casting is.  Even when you have good source material (like this film based on the best-selling book by Sara Gruen) you still have to cast the right people in the right parts.  Reese Witherspoon is an Oscar winning actress and Robert Pattinson is one of the most popular young male actors due to his involvement in the Twilight films.  Each are good actors under the right circumstances, but Francis Lawrence’s (I Am Legend, Constantine) film is not the right circumstance.

An elderly man (Hal Holbrook – Into the Wild, Wall Street) shows up in the rainy parking lot.  Two young workers take him inside believing he must have come with the folks from the retirement home Greenhaven.  The elderly man tells the guy he knows circuses and the his first was the Benzini Brothers in 1931.  Says his name is Jacob Jankowski.  Charlie (Paul Schneider – Lars and the Real Girl, Bright Star) gives him something to drink and asks him about the Benzini Circus and the tragedy in 1931.

Jacob (Robert Pattinson – Twilight, Harry Potter and the Goblet of Fire) is at Cornell taking veterinary science.  He is in the midst of taking his final exams.  During an exam he is pulled out and told his parents were killed in a car accident.  To pay for his tuition, Jacob’s father had remortgaged the house.  Jacob is left with nothing and no other family.

He decides not to go back to school and begins the long walk to Albany.  It is the Depression and jobs are scarce.  Jacob hops on a passing train.  The next morning the train stops and Jacob realizes he has hopped on with the Benzini Brothers travelling circus.  They begin setting up their tents in a large field.

Jacob begins working shovelling manure.  His first night he sees a blonde woman working with horses and is taken by her.  Then finds out that the blonde woman is the boss’s wife, Marlena (Reese Witherspoon – Walk the Line, Legally Blonde).  She is the star attraction of the circus and does not talk to anyone.

August Rosenblatt (Christoph Waltz – Inglorious Basterds, The Green Hornet) hires Jacob to take care of the animals for $9 per week once he finds out he studied veterinary science at Cornell.  The motto of August, the owner of the circus, is the show always goes on.  Workers work, animals perform.

After his star horse has to be put down, August gets a new star – Rosie, a 53-year-old female elephant.  Jacob begins to see that August is a violent and unstable man, but decides to stay with the circus in order to protect Rosie and Marlena.  The decision to stay drives Jacob to do things he never believed he was capable of.

The film does well in its ability to transport the viewer 80 years into the past.  It’s look is exquisite.  From the sets to the costumes it is all wonderful. A real treat for the eyes.  The cinematographer, director, costume director, etc. all recreated the Great Depression and traveling circus life right before our eyes.  A lot like a film made during the studio era.  Wonderful!

Of the three leads only Christop Waltz was right in his role.  That is not to say that Pattinson and Witherspoon were awful.  They just were not right and looked uncomfortable the whole way through.  This led to very little chemistry between the two which killed the whole romance angle of the film.  Without that you are not left with much.  Nothing much except August’s craziness.

Christoph Waltz demonstrates once again that he is marvellous at depicting complex evil characters.  His August is intimidating and always ready to go off.  Anytime he is on screen your stomach is in knots fearing that he could explode against man or beast anytime.  Despite all the disgusting attributes of the character you are drawn to August whenever he is on the screen.  That is a sign of a good acting job.