The percentage of celebrities who have tattoos is greater than that of the average population, but it is not all that different. While tattoos used to have several stigmas associated with them that is not the case anymore. They are seen as sexy and the fact that in 2002 54 of FHM’s 100 Sexiest Women list had tattoos should be proof of that. The fact that over half of the women on this list (and these are the women who often form public opinion about beauty and set fashion trends) leads me to believe that more and more women will be partaking in tattooing and body art in the future.

Here is a list in no particular order of 10 of the sexiest tattoos on female celebrities:

I think you have to start any list concerning female celebrity tattoos with this gal. Her body has become quite a canvas for them over the years. She has at least 12 of them over her body and shows no signs of slowing down. The tattoos she has chosen really reflect her as they are exotic, with a hint of danger and sexy. 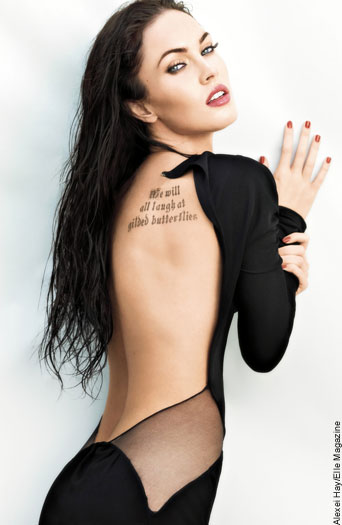 She has said that any time she gets another tattoo it is a not so silent act of defiance aimed at anyone who has told her not to get one. She states that she “likes the way getting a tattoo feels.” Fox has tattooed the name of her husband, actor Brian Austin Green, an image of her idol Marilyn Monroe on her right forearm and a line from a poem on her ribcage. She has 8 tattoos now and plans to get more including a “sleeve” on her arm.

Despite the fact that she was brought up in an ultra religious family this California Girl has a couple of tattoos. Opting for discreetly place words on different locations of her body, Perry has the word “Jesus” scripted on the inside of her wrist and also a matching (with her soon-to-be hubby, Russell Brand) Sanskrit script on her upper arm. She has indicated that she would like to add to her collection by adding a big one on her back and has previously stated that she might want it to be of Freddie Mercury (deceased lead singer of Queen), her music idol.

The young 22-year-old singer has lately hopped onto the tattoo bandwagon and her collection continues to grow. At last count she has six. They include some stars plunging down her back, a music note on her right ankle, a Pisces sign behind her right ear, and a Sanskrit prayer on her right hip. Rihanna has admitted that tattoos have become like an addiction for her. 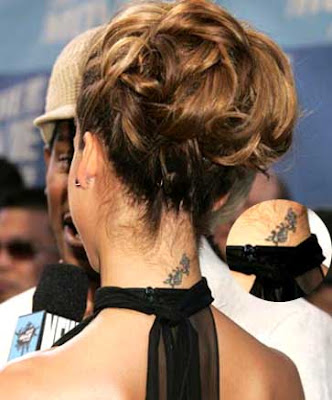 This actress, who is on most magazine’s sexy lists, has opted for the easily hidden and discreet variety of tattoos. She has a dove just above her bikini line, which is actually often seen due to the many photos taken of her wearing next to nothing.

This hottie, who plays a bisexual doctor on the television series “House”, has a couple of tattoos including the very girlie butterfly on her right upper arm and a tattoo she got when she was 13 of her boyfriend’s name. The tattoos she has are a result of her rebellious teenage years when she not only got tattoos, but also piercings, dated older men and even shaved her head. 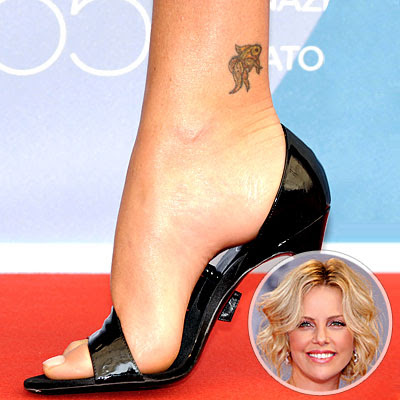 Another lady who keeps it small and classy. I guess she wanted them but didn’t want to sit for hours in the makeup chair covering them up for her onscreen roles. Theron has a blue tattoo of a single flower on her foot near her toes and a blue fish on the inside of her right ankle. 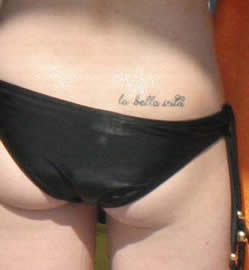 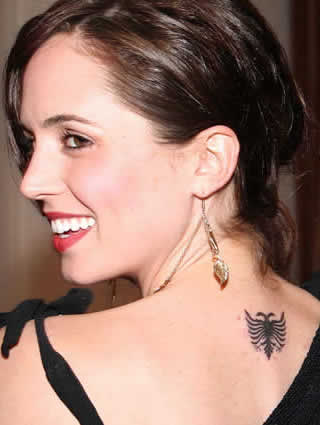 This actress burst onto the scene with her turns in television series “The Dollhouse” and “Buffy the Vampire Slayer”. She belongs to the group of actresses that has quite a collection of tattoos – at least 6. Dushku has the word “grace” on the back of her neck, a double-headed eagle on her back, script on her hip, and a cross on her ankle. This actress, singer-songwriter has a cool, red coloured cherry blossom on the inside of her left wrist.